I have read about this guy who put a tattoo of a world map on his back and inks the states/countries he has already travelled to. Unfortunately for me, I do not have the guts to undergo such procedure, and even if I make “magmatapang” I have skin asthma anyway, so, boo!

Luckily, I found this app/website which features the map of the Philippines and a checklist of provinces. The colored ones are the places I’ve been to. Apparently, I’ve travelled most to the north – because I love the north.

I’m a C-. Well, I haven’t listed Puerto Princesa and Surigao yet. I still have hope. Vying for C+ at the end of the year!

I think I will have to do this every year just to inspire myself to go new places.

Also a reminder that my passport is expiring in 2 years, so I better go to a foreign land again.

My Lakbayan grade is C-!

How much of the Philippines have you visited? Find out at Lakbayan!

This image made me feel nothing but sad. The before photo was actually taken on my birthday a year ago.

Cagayan de Oro has been one of the happiest places I’ve known and been to this year. It has been my birthday travel of sorts and it made me for than happy by exceeding my adventure expectations and unfolding culture right before my eyes.

It is utterly devastating to read and watch about the typhoon Sendong’s aftermath – continually arising death toll, homeless people, destroyed public transportation. I have been avoiding the late night news because it only shatters my heart into pieces. However, I can’t just leave it at that. I need to move my ass and start helping people the way my friends and I did during the typhoon Ondoy. I am looking forward to my week-long Christmas vacation as I can spend several days volunteering for the operations. Through these little yet significant ways, I can send help and a bit of comfort to the victims and bring back the defaced Cagayan de Oro back to Google Earth.

My friend Ian sent me this link for those who are interested in doing Volunteer work for Typhoon Sendong Relief Operations.

This is for a profound and meaningful Christmas. Let’s go!

Surprisingly Surprising – This is how I marked a red-letter day in June. I wonder how it came to Mr. Snooze my penchant for surprises. He got us plane tickets to Cagayan de Oro! Weeeh!

Earliest Passport to my Heart

The Cagayan de Oro trip was his birthday gift to me. Since my birthday is always a month-long celebration, we had it scheduled last weekend.

Mogu-Mogu! Always part of the plan 🙂

Here we are being bored to death waiting for the plane. We had our Kowloon House siopao breakfast plus Mogu Mogu.

This was also part of a test shot series. After zillions of attempts, we finally decided to use the camera manually. Mr Snooze was the trip’s official photographer anyway.

It was a sunny day and we had no trouble with the flight. The sky was clear, I almost cried at the sight of the white sand beaches in Visayas. (Oh yes, you’re next!)

We arrived at Lumbia Airport at around nine in the morning. It is a pretty small airport (I think it can only accommodate two or three planes at a time) located at Cagayan de Oro City, though honestly far, think thirty-minute drive from the town.

The Love of Big Burgers

Our friend Kae, who has been staying at Cagayan de Oro for seven years now, was as our tour guide for the day. She picked us up the airport and brought us to Dahilayan Adventure Park in Bukidnon. She is the worst tour guide ever, giving us pamihiin rather than facts to explain the oddities along the way. She even proudly calls, mistakens rather, a gerbera for a sunflower! But since she’s funny and we miss her like that, we brought her a big burger and Krispy Kremes! Yey!

We passed through hectares and hectares of pineapple on the way to Bukidnon. The fire trees were also beautiful.

Bukidnon was a three-hour drive from the airport. It’s a trip through the mountains and vast areas of pineapple, corn, tomatoes, calamansi, etc. The weather was kind of chilly, it reminded me of my dear old Baguio.

Arrived at Dahilayan Adventure Park at around noon. We had lunch at the park then geared up for the longest zipline afterwards! 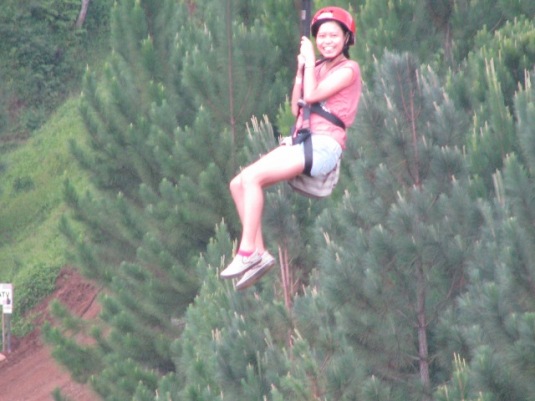 Mr Snooze was at the zipline too while taking this photo. Thus, the weird setting (he used manual) and angle. I love the pine trees!

End of the Longest Zipline

We took the all-rides zipline, inclusive of a 320-meter, 150-meter and 840-meter (longest) zipline, for only 600 bucks! It wasn’t as much as scary as the Tagaytay zipline, for there were pretty landscapes and scenery to wonder at.

We roamed around Dahilayan Park afterwards. 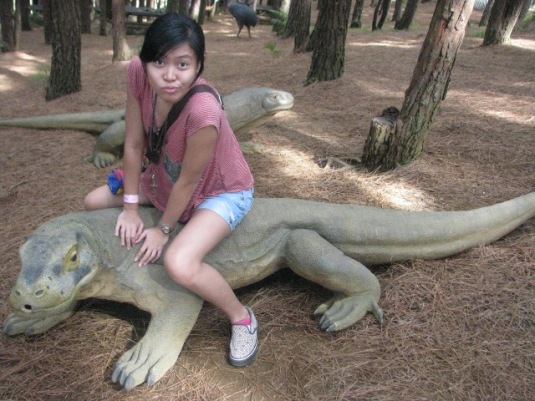 Had this photo taken just to scare the wits out of my sister. HAHAHAHA She freaks out at the thought of lizards.

A souvenir photo for my little gorilla brother. Im such a sweet ate!

Mavz, me, Kae, and Ronald

And snaps from the playground. Kae, Mr. Snooze and I were first acquainted in gradeschool, maybe the reason why we act like kids when were together. HAHAHA

It was another 3 long hours on the way back to the city. It was already dark when we checked in at the hotel. We cleaned up and rested for a while then hopped on to Penong’s (it’s just stone’s throw from our our house!) for dinner. 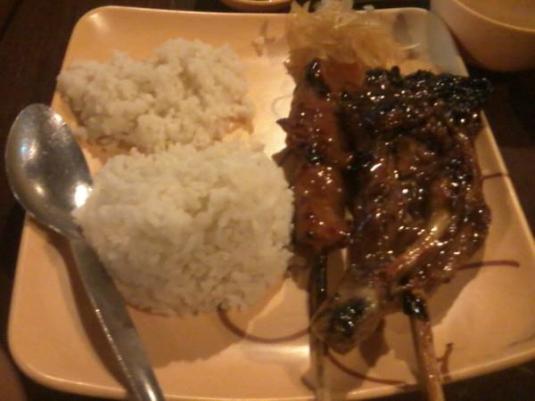 Chiken and pork barbecue for me. I had three cups of rice that night. 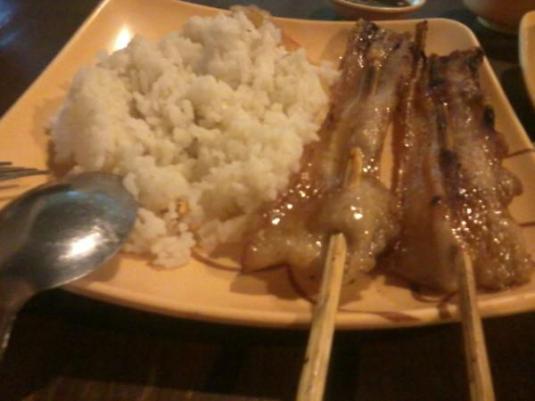 Barbecued Pork Belly was Mr. Snooze’s dinner. I was ingget because they’re big and tasted like bacon!

This saved me from the default clam chowder from Soup Kitchen – Halaan Soup! Fresh clams!

White Water Rafting was our agenda for the next day. We were picked up from the hotel at eight in the morning. Yes, I was so excited, I woke up around six in the morning for this!

The weather was pretty fine that day. It wasn’t too sunny (Yey, no sunburns!) nor did it rain, or else, the activity would have been called Brown Water Rafting. But the waves and rapids were pretty active and perky.

At the twist rapids. Each side were to do reverse paddling.

Our tour guides made our rubberboat climb up a formation of rocks in the middle of the river. It was cool!

Jumped off the water 15 feet deep!

There was a part of the river suitable for swimming. I was never good at swimming, I actually barely know how to. But almost everyone from the boat jumped to the waters and I was like a baby crying in utter fear. But because I’m nagmamatapang like that, I joined the group. I seemed unmindful of the 15-feet deep water, but I was really scared! 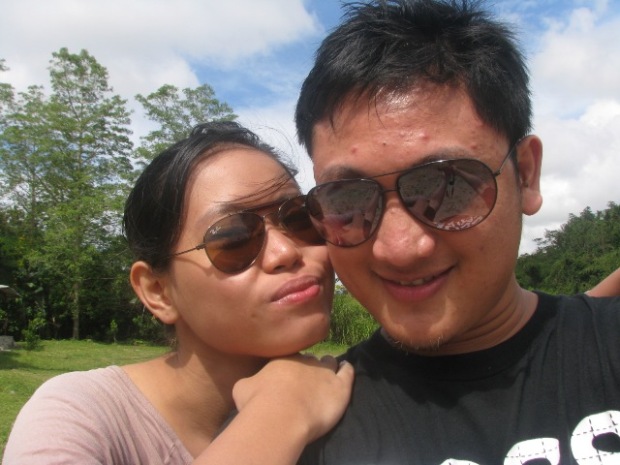 We both got a little darker after the rafting activity

We got a free lunch after White Water rafting. We were all tired but we still explored the Macahambus Cave in the area. We actually pleaded our tour guides to do so since it’s not part of the package. HAHAHA Good thing, they gave in. 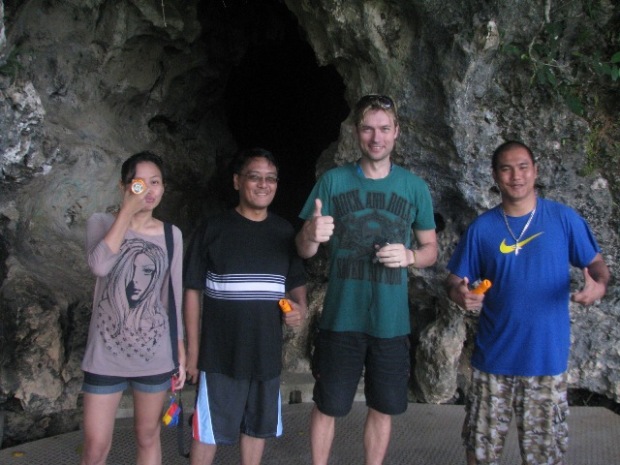 Me, a Kuya, a German Kuya, and another Kuya

The trek was rather short. Macahambus was just a small cave where soldiers took refuge during the American War. It didn’t have any entrance fee but we needed to pay for the rent of our small flashlights. The cave wasn’t well-maintained, we found a bottle of Fit and Right inside and graffiti at the veranda. 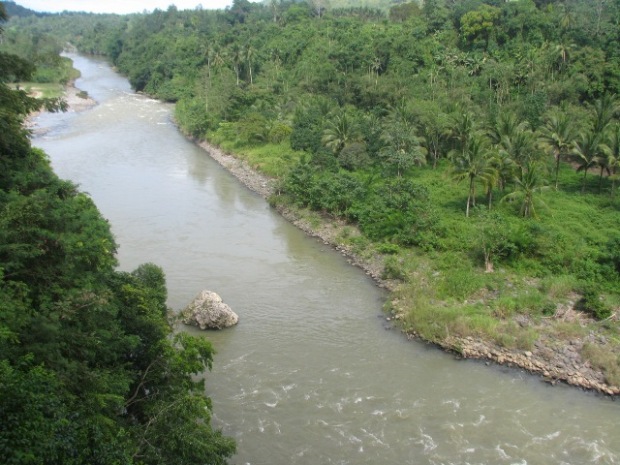 View from the end of the Macahambus Cave – Cagayan River, the White Water Rafting place to be

We slept hours when we got to the hotel. Kae joined us after she watched the Pacquiao-Marquez fight  at her boyfriend’s. We walked around DiviSoria searching for whatever we liked for dinner. Our feet led us to Sentro. 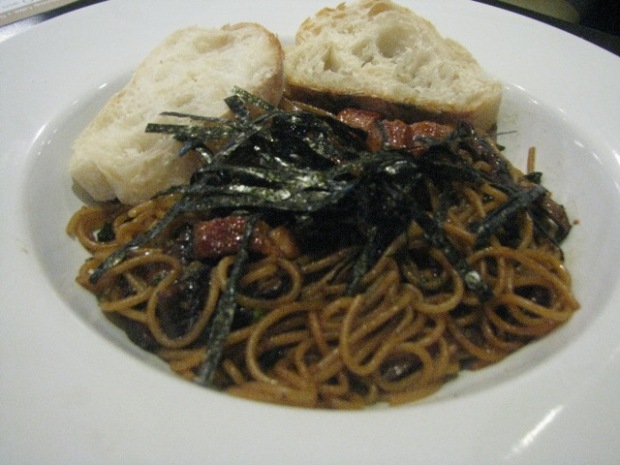 My Unagi Pasta. I loved how they made eel and seaweeds pasta perfect!

We headed to Kae’s place afterwards. We had beer and a poker. Yes, finally, I know how to play poker. Who would’ve thought I’d learn it in CDO?

Monday was our lazy random day, or maybe, I was too lazy I just wanted to stay in bed. But after lunch, Mr. Snooze dragged me to wherever our feet would take us.

We walked from the hotel to DiviSoria to the Cathedral.

I wasn’t actually sure if taking photographs were allowed inside the cathedral, but my art studies self sneaked out and asked my official photographer aka Mr. Snooze to take snaps of the interiors. The cathedral was basically of wood. The facade and some other parts were just newly renovated and turned into cement.  I was drawn into its wooden vaults with triangle and wide arch support. Weird because some niches’ arches were pointed and had a Gothic feel. Weird mix.

We took a jeep to Limketkai Mall afterwards just to bully and bother Kae at her office. There was nothing interesting in Limketkai. It’s your usual mall, like any other mall in Manila. We went to Vjandep afterwards to get friends pasalubong. We rode a motorella (it’s like a cross between a tricycle and a jeep) going home.

We rode the motorella YEY!

We got up early the next day for our hotel check out and to meet Mr. Snooze’s cousin. We had real good chicken for breakfast! 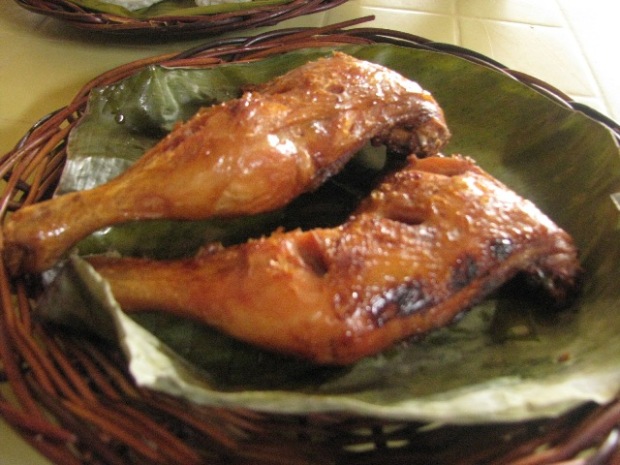 These were Inasal chicken initially roasted then deep fried. The carinderia provided no spoon and forks, we were compelled to eat with our hands. It was really fun!

We had lunch just after two hours. We were still full, but lo and behold, we still had a feast!

Fish Kilawin, because Mr. Snooze remembered how I devoured his father’s kilawin in a matter of minutes HAHAHA

Buca Halo! This is so benta to me! No brain freeze at all 🙂

Thanks ate for lunch and after lunch accommodations! 🙂

We stayed at Mr. Snooze’s cousin’s place after lunch. I took a nap while Mr. Snooze uploaded our Rafting pictures in Facebook. Who’s still perky? We headed for the airport at around 4 in the afternoon. Turned out, we were early as our flight was delayed. There was an Ikebana exhibit then, which Mr. Snooze pre-occupied himself with. He took pictures of the flowers while waiting for our flight.

It was past 6 in the evening we were allowed to board the train. It was already dark then. So, that’s it. Bye CDO! Til next time! 🙂

What are you looking for?